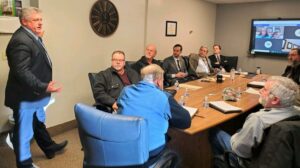 In response to a bounty hunt that turned tragically fatal in Butte and other incidents, a state official wants lawmakers to rein in rogue bail bond agents and “Wild West” tactics sometimes used to nab fugitives.

Troy Downing, Montana’s auditor and commissioner of Securities and Insurance, is pushing a bill that would require all bail recovery agents to be trained and licensed and in most circumstances, notify police of planned apprehensions.

They would have to be 21 or older, could not be convicted felons and must be instructed on procedures for detaining people, their civil rights, the use of force and civil liability, among other things.

It has already received a hearing and strong endorsement from the House Judiciary Committee and is now before the full House.

“This is common sense legislation to ensure that the public is protected and the recovery agent is licensed and insured,” Lynch told The Montana Standard. “I applaud the bipartisan work to make Montana communities safer.”

Numerous bail bondsmen oppose the bill, saying it’s restrictive and based on the misdeeds of a few bad actors.

“The bill as drafted is a knee-jerk reaction to a few incidents that have occurred across the state concerning fugitive recovery,” said John Looney, president of the Montana Bail Agents Association.

The association says the bill doesn’t address flaws in the judicial and law enforcement sides of the bail system. Those would be covered in a separate bill being drafted, Looney says.

Downing says there have been more than a few bad incidents, including some that don’t make headlines, but he agrees that it’s the bad actors he’s targeting.

Regulatory authority over bondsmen in Montana is limited to insurance matters, which fall under his office. He says the vast majority act responsibly and play an integral role in the criminal justice system.

But some do not, he says, and their abuses, crimes and violence won’t stop until the Legislature provides some boundaries and oversight.

“We are trying to solve a very, very specific problem and that is protecting the public by putting sideboards on this very specific area of fugitive recovery in the bond industry,” Downing told the Standard.

He said there were abuses before he took office in 2021 but some recent cases led to public outcry and demands for action. Mercer told lawmakers that a botched bounty hunt in Butte was a “tipping point.”

Prosecutors say on Dec. 19, 2021, bondsman Jay Hubber and another man, Nicholas Jaeger, barged into William Harris’ house in Butte looking for a bail-jumper. There were several other people in the house, too.

Hubber tased the bail jumper and during a struggle, Jaeger took a gun from Hubber and in the chaos shot Harris, prosecutors allege. Harris, 42, was dead when police arrived. Jaeger, a convicted felon, had joined Hubber to assist in the bounty hunt.

Jaeger and Hubber, both 33 at the time, were each charged with deliberate homicide and aggravated burglary. They have pleaded not guilty, and the cases are pending. Downing suspended Hubber’s surety bail license last year.

“This last issue in Butte was, I think, really a tipping point in the industry to say, ‘We really have to have more clarity on who the players are, what the training is in the industry, what the communication is before someone is taken into custody …” Mercer told a House Judiciary Committee hearing on the bill on Jan. 6.

Frank Cote, government affairs director in the Auditor’s Office, said there were other recent incidents.

In one, a bondsman and two employees went door-to-door in a trailer park in Park County, brandishing weapons while looking for a defendant. When they got to the defendant’s aunt and uncle’s residence, they were told the defendant wasn’t there but they got inside anyway, and the uncle was tased.

A year later, a bondsman allegedly shot out the back window of a vehicle as a defendant was driving away from the Town Pump in Three Forks. That bondsman was also allegedly rebating or offering to rebate money others owed on their bonds if they assisted in fugitive recovery operations. That bondsman faces felony criminal charges and in May, Downing suspended his license.

In November, a man wearing a tactical vest that read “agent” allegedly pointed a gun from his car at a bail violator, and the two vehicles crashed on a street in Great Falls.

The man told police the defendant ran from him the previous day, according to court documents cited by The Electric, an independent news site in Great Falls. A bail bondsman said the agent, who now faces assault with a weapon and other charges, worked for him and was helping him find people.

“It’s just a situation that is potentially a scary one out there,” Cote told the Judiciary Committee. “While we regulate bail bondsmen … what we don’t regulate, and really no one regulates, are what we’re calling recovery agents.”

Also in the bill

Under the bill, anyone who apprehends defendants for bail purposes must be licensed by the Commissioner’s Office, must be 21 or older, have a high school diploma or equivalent and cannot be a convicted felon. Convictions for drug offenses or crimes of “moral turpitude” could rule them out, too.

Moral turpitude isn’t specifically defined in Montana law but generally is considered to mean conduct contrary to justice, honesty or morality such as fraud or breach of trust, Downing’s office said.

To obtain a license, agents must have at least 40 hours of training and instruction in the areas mentioned previously or proof they have completed training required by local, state or federal law enforcement agencies or branches of armed forces to carry out the duties of a peace officer.

Agents can still use reasonable force to apprehend and detain someone, but they must have probable cause to believe the person will not show up for a court hearing after bail has been posted.

They must also notify local police or sheriff’s officials before attempting to apprehend someone unless “exigent circumstances” prevent that. Those can include a tip or knowledge that a wanted person is about to leave the state.

“We don’t want to endanger our law enforcement officers coming into an unknown situation,” Downing said. “If they’ve been notified in advance, they know what’s going on.”

The training requirements make sense for recovery agents who have unique powers usually only granted to law enforcement professionals, he says. And the felon exclusion alone might have prevented the tragedy in Butte.

“I think this is good, sound public policy,” Downing said. “I think it’s in the public interest, and I don’t think this in any way hinders a bond producer from being able to do their job.”

Downing says his office talked with bondsmen and later sat down with a number of them and went line-by-line through the bill. Some parts of the bill were struck in response, including licensing requirements for psychological evaluations and drug testing.

But Looney says it was a one-way approach, and bondsmen weren’t brought in until a bill was written.

“Instead of saying, ‘You know, let’s sit down, what are the issues we need to tackle and what needs to be changed,’ they just drafted their own bill and said, ‘Here’s our bill, what do you need?’” Looney said. “They placated us and they wanted to be able to go in front of the committee and be able to say, you know, ‘We worked with the agencies to draft this bill,’ which is not the case.”

Looney told the committee that very few complaints were made to the auditor’s office from 2015 to 2020, and most of the complaints involved a handful of bondsmen.

He said he warned Downing’s office about Hubber and the bondsman tied to the Park County and Three Forks incidents, but nothing was done until their actions made news.

Looney says the association is working to get a Senate bill filed that would address some of Downing’s concerns and tackle issues hurting legitimate bonding agencies.

Under one draft, the felony disqualification goes back 10 years, not a lifetime. Crimes of “moral turpitude” are not included as reasons a license can be denied, Looney said, because they can be interpreted to include just about anything.

The association is OK with some training provisions but wants the 40-hour requirement removed and wants specifics on who will provide the training it, pay for it and oversee it.

And it wants provisions added that address other problems.

For example, their draft bill requires any bail bond surety to collect a minimum of 10% from a defendant before posting a bond and getting the person out of jail.

That used to be standard practice but now, some agents in Montana and a few large out-of-state companies are getting defendants out of jail for free upfront and demanding premium payments later. When they miss payments, agents chase them down, leading to incidents like the one in Butte, Looney said.

With the 10% mandate, he said, “You won’t have these guys (agents) going out and chasing guys for non-payment of premiums.”

Other provisions would put hiring and licensing requirements on out-of-state ventures so they don’t have advantages over Montana agencies.

Judges are starting to release more defendants without bail because they know the out-of-state companies can post them without charging anything, and that raises public safety concerns, Looney said. Association-backed provisions would address that.

The draft legislation addresses Downing’s concerns, Looney said, as well as concerns from within a bail industry that saves taxpayers in Montana millions of dollars a year in incarceration, fees and pretrial services.

During the committee hearing, individual bondsmen raised concerns about other parts of Downing’s bill, including those on notifying local police about apprehensions.

Downing and his staff say they’ve had lots of conversations with Looney about the bail industry, noting they listened to industry concerns during a December meeting and made changes in response. They included removing some licensing requirements.

“The bondsmen made some valid points,” said Ole Olson, chief legal counsel for Securities and Insurance. “We amended the introduced bill to reflect their concerns. However, we did not agree with some of the changes because they were outside the scope of the purpose of the bill.”

“We want to stay in our lane,” he said, adding that the office has no problem with bondsmen seeking changes in other bills.

Loveridge said staff couldn’t find records of Looney warning them about bondsmen involved in the Butte and Three Forks incidents, but conversations often touch on lots of areas.

At least two other bills have been filed dealing with bail bonds, including one with at least some language similar to that Downing and Mercer support in their bill. Those are the provisions Downing really wants to get passed this session because they will help protect the public.

“One of my sayings is, ‘Bad actors are bad for business,’” Downing said. “Whether you’re talking about bail bonds or financial advisors or insurance companies, nobody wants headlines of bad actors in their business so I think most industries support some reasonable regulation.”

“What we do disagree with is that it should be the Wild West out there,” he said.

Please give us your feedback!

Please let us know how we could improve this article.