FWP will continue to pursue purchases and easements using funding from the Habitat Montana account, Director Hank Worsech and spokesman Greg Lemon said in an interview. But interest from landowners and some county commissioners, as well as controversy over some past projects, contributed to the decision to develop and fund a leasing program.

The goal for the program is leasing 500,000 acres in five years, with a focus on prairie grasslands, and specifically, sage grouse habitat, they said.

“It’s not a ‘this or that,’ it’s another tool in the tool chest,” Worsech said of adding the leasing program to Habitat Montana. With more land selling in Montana, FWP has seen a number of properties formerly open to public access lost in the last year, he said.

While not a direct parallel, conceptually Worsech compares a state leasing program to the federal Conservation Reserve Program, or CRP, which paid landowners to remove land from agricultural production in part for wildlife habitat. The focus on sage grouse habitat is important as a tool to keep the birds from listing under the federal Endangered Species Act, he said.

Long-time FWP Wildlife Division Administrator Ken McDonald has been assigned to get the new leasing program off the ground. That includes the framework for valuation of the leases and other nuts-and-bolts components of the program.

The financial impact of a new leasing program, and what it means for Habitat Montana’s funding of existing programs, has not yet been determined.

“The cost of the program, it’s too soon to tell and we do not know what the landowner interest will be until the program is stood up,” Lemon said. “What I can say is that we will do our best to leverage every dollar of Habitat Montana, predominantly (as a match to federal conservation dollars). Our focus is to make sure every dollar of Habitat Montana money goes as far as it can.”

Habitat Montana was originally conceived by the Legislature in 1987, earmarking a portion of hunting license sales for purchasing wildlife habitat and private land conservation easements. Lawmakers removed a sunset on the program in 2005, making it permanent. It generates about $3 million per year, according to a 2021 FWP report. 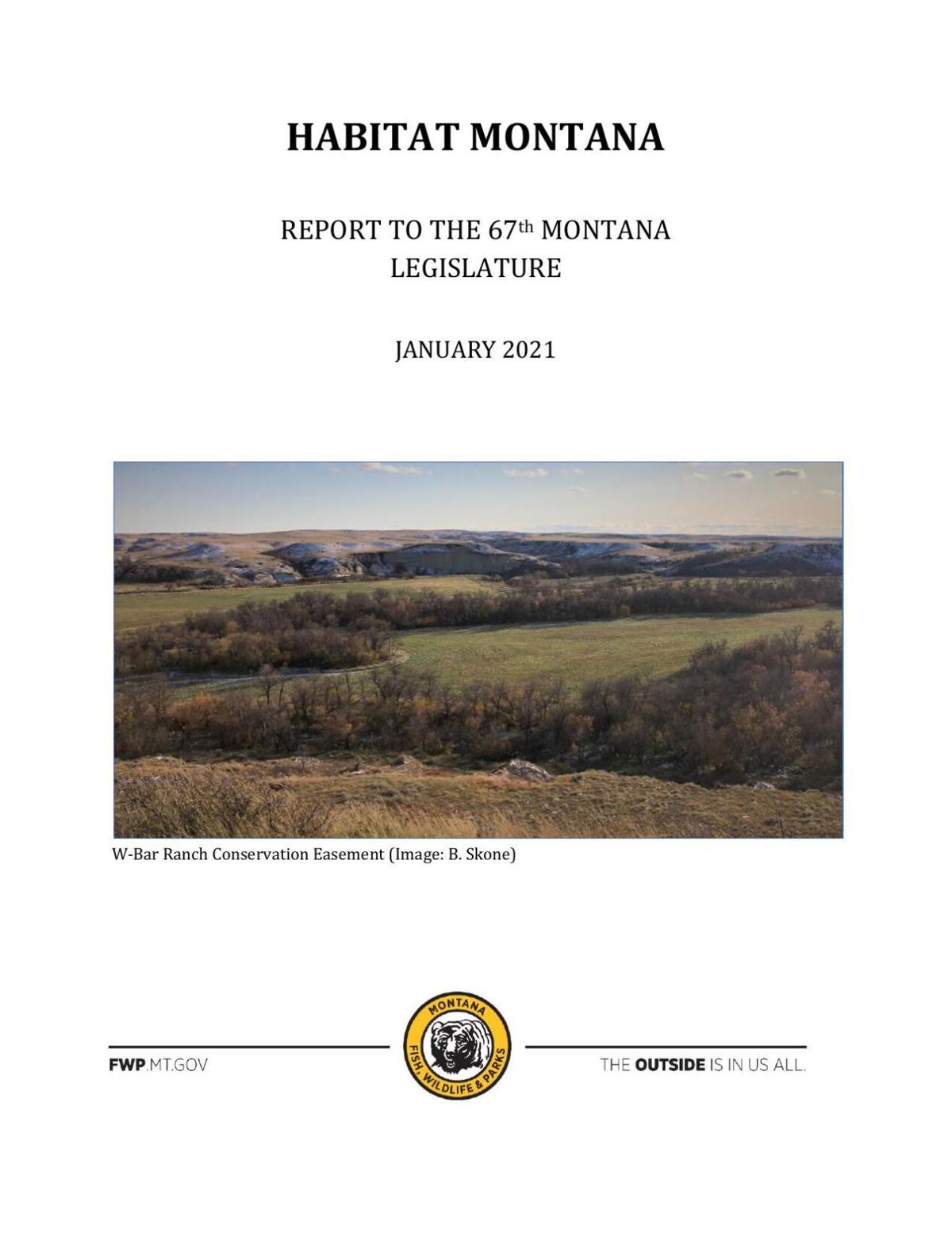 FWP is then expecting to bring the leasing program to the Montana Fish and Wildlife Commission in August, which will also include public comment. If the commission approves the overall program, the department could proceed with enrolling landowners without returning to the commission for individual approval of each lease. The program will also not require approval of the Montana State Board of Land Commissioners — made up of the governor, attorney general, secretary of state, state auditor and superintendent of public instruction — as is presently needed for conservation easements or land purchases, Worsech and Lemon said.

“Our commitment to our mission of conservation hasn’t wavered, we’re just looking at ways to be more effective at getting that conservation done,” Lemon said.

Worsech and Lemon also believe the new leasing program could be a gateway to consider a future permanent easement, noting that the permanence of an easement can be intimidating for many conservation-minded landowners.

“(Leasing) doesn’t mean that you can’t reevaluate that if the climate changes and put them into a perpetual (easement) at that time, but it’s almost like you get the check it out and make sure it’s working,” Worsech said.

The Montana Wildlife Federation has been a major proponent of the Habitat Montana program, frequently testifying in favor of conservation easements and land purchases. News of the new leasing program brought a mix of enthusiasm but also concerns about what it means for existing programs and Habitat Montana.

“Perpetual easements are one of our best tools for advancing landscape conservation priorities and keeping working lands in the working hands of Montanans,” said MWF’s Marcus Strange. “While we are always thrilled to add another conservation tool to the toolbox, we should not do that at the expense of the existing options that we have at our disposal, such as the Habitat Montana program. These programs are biologically sound and broadly supported by local stakeholders. As open lands and wildlife habitat become increasingly desired by out-of-state interests, permanently protecting the places that make Montana the last best place should be our No. 1 priority.”

The new program shines a spotlight on struggles to maintain or expand public access for hunting. The state’s role in securing access through buying land or permanent access has seen significant debate among elected officials and advocacy groups, who have sparred over use or changes to existing programs.

FWP land purchases and conservation easements funded by Habitat Montana have been lauded by hunting advocates for expanding public access and conserving wildlife habitat. But both have seen disapproval as well, from those opposed to the state owning more land or questioning the price of some easements. GOP lawmakers in the past have sought to curtail spending from Habitat Montana including a since-lifted halt to new land purchases and legal changes to add additional layers of oversight to easements.

In 2018 FWP’s conservation easement program pitted then-Gov. Steve Bullock, a Democrat, against the four Republicans making up the five-member Land Board. Following debate over private property rights and split surface and mineral estates, three of the Republicans voted to indefinitely delay the $6.1 million Horse Creek Conservation Easement near Wibaux.

Bullock moved to finalize the easement without the Land Board’s approval, saying that although FWP had traditionally brought easements to the board, the law states the easements are finalized by a vote of the Montana Fish and Wildlife Commission. The clash ended in the Montana Supreme Court, which sided with the governor.

Last year Gov. Greg Gianforte signed a new law putting the final vote on FWP’s easements with the Land Board.

FWP has not brought a conservation easement to the Land Board during the current administration — one FWP land purchase did pass unanimously. The department has moved some conservation easements through the initial commission process. Those easements have focused on large former industrial timber lands in western Montana with long histories of public access, rather than agricultural land.

FWP said six conservation easements are currently in various stages of the approval pipeline, including some on agricultural lands.

Worsech says that the popularity of easements among hunting groups remains strong but he has continued to hear consternation from some opponents.

“I’ve heard it several times, a producer or somebody that doesn’t do a really good job, and kind of going under, then we would come along and give them a shot in the arm and keep them on the landscape for a period of time, then it ties up that property with a perpetual easement.”

Worsech also believes FWP needs to do more follow up on existing conservation easements. That includes site visits at those properties to gauge compliance with the terms of the easement, and looking at contract language for enforcement of the terms.

Moving forward, Worsech and Lemon said conservation easements must meet certain criteria if they are to gain enough support to pass the commission and Land Board, which have the power to vote down easements. Central to that is local support including an endorsement letter from the county commission — without that support they foresee difficulty in getting the votes necessary to pass either body.

“Obviously there’s a change with a change in administration, there’s a change in the Land Board as well,” Worsech said. “So what we’re looking for is, we’ll still bring things to the Land Board, but what we have to do is make sure they meet the criteria that they’re accepted by the county commissioners and the public in the area in doing these things because we took a lot of heat for getting some of these perpetual easements through that the community and (area) landowners thought … we shouldn’t have been doing.”

Worsech said he had not met with all the current Land Board members, but again noted the history of when easements have stalled with a lack of grassroots support.

Members of the all-Republican Land Board provided varying degrees of specificity to the Montana State News Bureau on whether they conceptually support conservation easements or what criteria they would look to inform their votes.

Gov. Greg Gianforte and state Auditor Troy Downing both agreed that local support would factor into their decisions.

“The governor supports easements as a tool to further the state’s conservation and public access goals,” a Gianforte spokesperson said. “As no proposed easement is the same, each one must be reviewed on a case-by-case basis with appropriate public input. The governor looks for projects that receive broad support from the local community, especially affected stakeholders and local elected officials.”

Downing said in an interview that he was “not categorically opposed to a perpetual easement, but they should be considered individually, taking into account the long-term effects on the agricultural resource, development, and equally important, the tax base.” He added he thought it was very important to have local input.

Spokespeople for both Attorney General Austin Knudsen and Secretary of State Christi Jacobsen emphasized the individual nature of each proposal.

Knudsen’s spokesperson said he would “evaluate and make a decision about each conservation easement proposal on its own merits” and a spokesperson for Jacobsen said she would “take into consideration the agenda item’s specific details, background, public comments, etc., before joining her fellow State Board of Land Commissioners in a vote.”

A spokesperson for Superintendent of Public Instruction Elsie Arntzen also provided a framework for decision making.

“The Superintendent diligently reviews all information that comes before the Land Board,” an OPI spokesperson said, also providing language in state statute for conservation easements. Arntzen is the only current member of the Land Board that voted on Horse Creek, joining two other members to delay the vote.